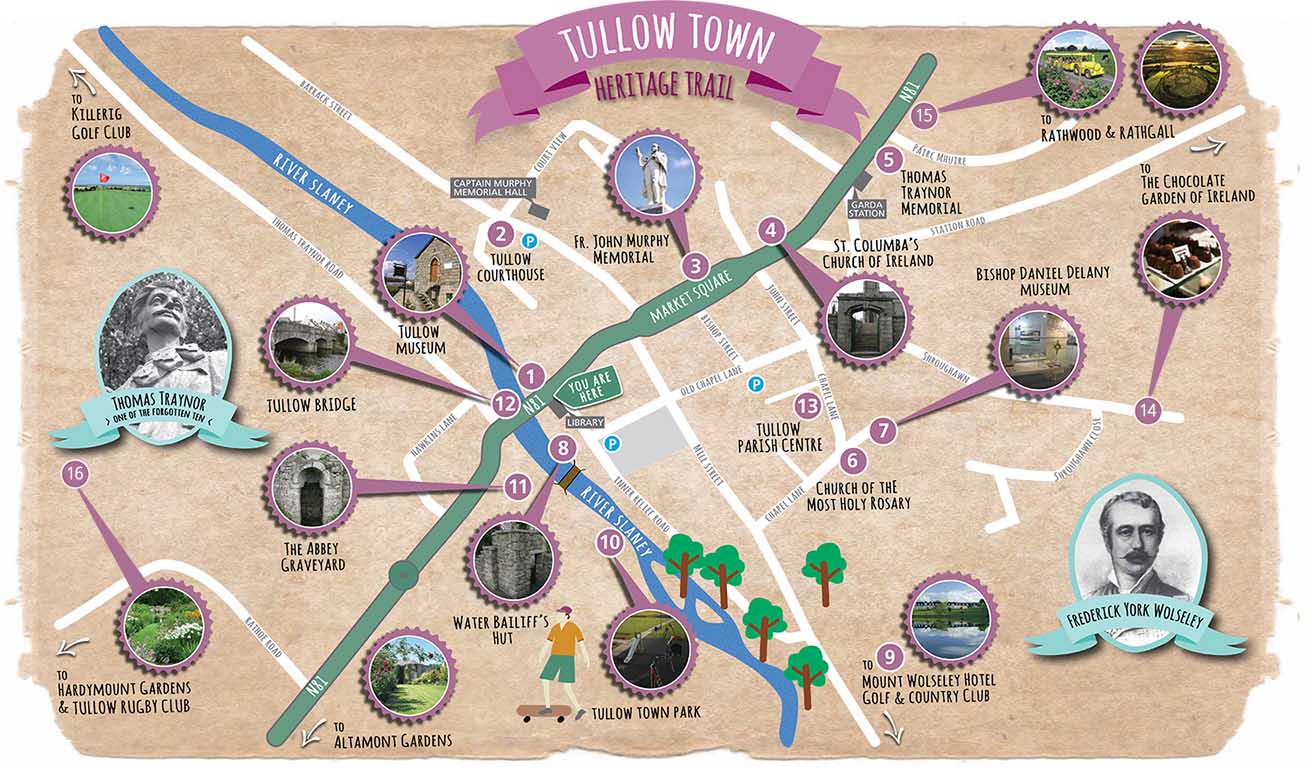 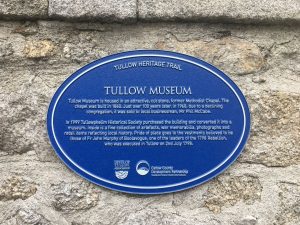 Tullow Museum features a collection of artefacts reflecting local history. Pride of place is given to the vestments of Fr. John Murphy of Boolavogue and the 1798 Rebellion.

Tullow Courthouse
Tullow Courthouse, a late Georgian structure was built circa 1825. Inside there is a double-height courtroom with a large swept-arched window with multiple panes and an upper floor gallery on one side.

Thomas Traynor Memorial
Thomas Traynor, born just outside Tullow on 27th May 1881, took part in the 1916 Rising. On 14th March 1921, he was captured and after a brief trial was hanged in Mountjoy Prison.

Catholic Church of the Most Holy Rosary
This church was built by Bishop Daniel Delaney in 1805 and the fine tower and spire were added in 1833.

Water Bailiff’s Hut
A water bailiff was a law enforcement officer responsible for the policing of bodies of water such as the River Slaney.

Mount Wolseley
Mount Wolseley is the ancestral home of the brothers Viscount Wolseley, one of Britain’s most important military leaders and Frederick York Wolseley, who gave his family name to the Wolseley car.

Tullow Town Park
Tullow Town Park features a children’s play area, outdoor exercise equipment and a state of the art skateboard park. There are plenty of comfortable park benches with loads of room for children to run freely.

Tullow Bridge
References to a bridge at Tullow can be found in a 17th-century publication by Thomas Dineley, who visited Ireland in 1680.

Rathwood Garden Centre
Home to the famous Santa Train. Great atmosphere, great food and plenty to do. Relax on the patio area over a cuppa while the kids have a play in the playground.

Hardymount Gardens
Stunning at this time of the year. Bring a picnic and take it all in.

The O’Garvey’s became merged with the Kavanaghs.

Tullow was also known as “Tealach Foirtcheirn” or Foran’s Hill.

Haroldstown Portal Tomb or Cromlech is one of a group of these tombs stretching from Dublin to Waterford.

It is situated near the bank of the Dereen River, which is a tributory of the Slaney. It features two overlapping capstones resting on a long chamber. It has two well-preserved portal stones large doorstone and side stones.

These tombs were used for communal burial during the early Neolithic period. Their date of construction is circa 3300-2900 BC.

This monument is more commonly called the Haroldstown Dolmen.

A castle was erected here under Hugh de Lacy circa 1181. The English Crown granted Tullowphelim and other manors of Carlow to Sir Thomas Butler, 7th Earl of Ormonde, following the passing of the Act of Absentees which occurred in 1494.

In 1650 Tullow Castle was attacked by Cromwellian forces under Colonels Hewson and Reynolds. It was stoutly defended by Colonel Butler. In 1680, Thomas Dineley, an antiquary from Worcestershire visited Ireland.

He described Tullow as “a fair town in the County of Catherlough, with a good castle, part of the Estate of the Earl of Arran”. William Crutchley, Justice of the Peace, was named as the tenant of the castle.

Tullow Castle is no longer in existence, but the date and circumstances of its demolition are not known.