This project received grant aid from Carlow Local Community Development Committee under the Rural Development Programme Ireland 2014-2020 which is financed by the Irish Government and by the European Agricultural Fund for Rural Development: Europe Investing in Rural Areas.

Tullow Museum is housed in an attractive, cut stone, former methodist chapel. The chapel was built in 1860. Just over 100 years later, in 1968, due to a declining congregation, it was sold to local businessman, Mr. Phil McCabe.

In 1999 Tullowphelim Historical Society purchased the building and converted it into a museum. Inside is a fine collection of artefacts, war memorabilia, photographs and retail items reflecting local history. Pride of place goes to the vestments believed to be those of Fr. John Murphy of Boolavogue, one of the leaders of the 1798 Rebellion, who was executed in Tullow on 2nd July 1798. 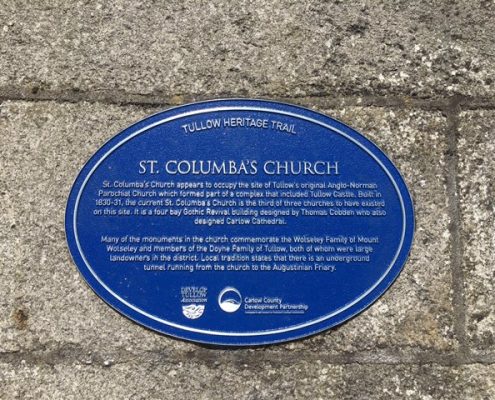 St. Columba’s Church appears to occupy the site of Tullow’s original Anglo-Norman Parochial Church which formed part of a complex that included Tullow Castle. Built in 1830-31, the current St. Columba’s Church is the third of three churches to have existed on this site. It is a four bay Gothic Revival building designed by Thomas Cobden who also designed Carlow Cathedral.

Many of the monuments in the church commemorate the Wolseley Family of Mount Wolseley and members of the Doyne Family of Tullow, both of whom were large landowners in the district. Local tradition states that there is an underground tunnel running from the church to the Augustinian Friary. 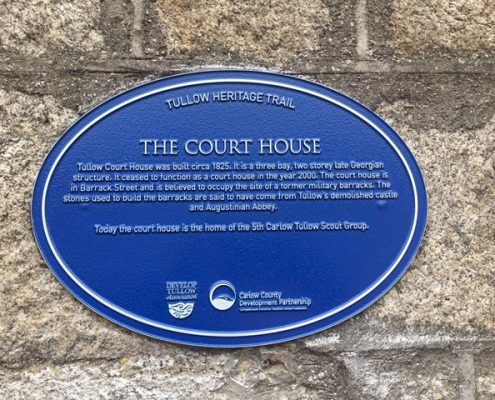 Tullow Court House was built circa 1825. It is a three bay, two storey late Georgian structure. It ceased to function as a court house in the year 2000. The court house is in Barrack Street and is believed to occupy the site of a former military barracks. The stones used to build the barracks are said to have come from Tullow’s demolished castle and Augustinian Abbey.

Today the court house is the home of the 5th Carlow Tullow Scout Group.

Church of the Most Holy Rosary

This church was completed in 1805 by Bishop Daniel Delany to replace the penal law chapel in Mill Street. Cruciform in shape, it was originally known as the Church of hte Nativity of the Blessed Virgin Mary. The tower and spire were added in 1833 by the administrator, Father Thomas Nolan. The architect employed is believed to have  been Thomas Cobden who is also credited with the design of St. Columba’s Church and Carlow Cathedral. The church was re-dedicated to the Most Holy Rosary by Cardinal Paul Cullen in 1875. The high altar was erectd in1900. The central aisle was widened in 1940-41. The sanctuary was rearranged in the 1970s. Major repairs and a re-ordering took place in 1988-40. The church and its grounds are the burial place of Bishops Daniel Delany (d.1814), Michael Corcoran (d.1819), James Lynch (d.1896), of clergy, of early Patrician Brothers and of several lay people. 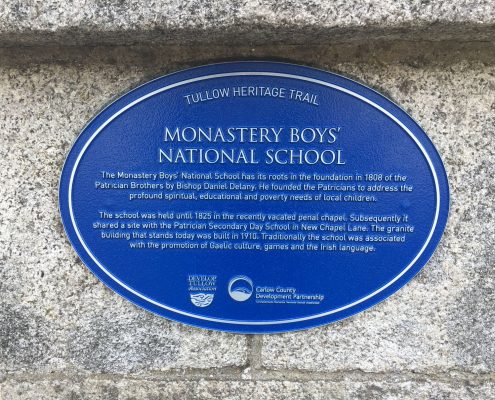 The Monastery Boys’ National School has its roots in the foundation in 1808 of the Patrician Brothers by Bishop Daniel Delany. He founded the Patricians to address the profound spiritual, educational and poverty needs of local children.

The school was held until 1825 in the recently vacated penal chapel. Subsequently it shared a site with the Patrician Secondary Day school in New Chapel Lane. The granite building that stands today was built in 1910. Traditionally the school was associated with the promotion of Gaelic culture, games and the Irish language. 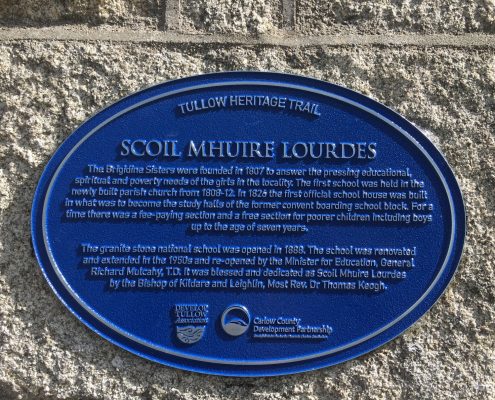 The Brigidine Sisters were founded in 1807 to answer the pressing educational, spiritual and poverty needs of the girls in the locality. The first school was held in the newly built parish church from 1808-12. In 1826 the first official school house was built in what was to become the study halls of the former convent boarding school block. For a time there was a fee-paying section and a free section for poorer  children including boys up to the age of seven years.

The granite stone national school was opened in 1888. The school was renovated and extended in the 1950s and re-opened by the Minister for Education, General Richard Mulcahy, T.D. It was blessed and dedicated as Scoil Mhuire Lourdes by the Bishop of Kildare and Leighlin, Most Rev. Dr thomas Keogh. 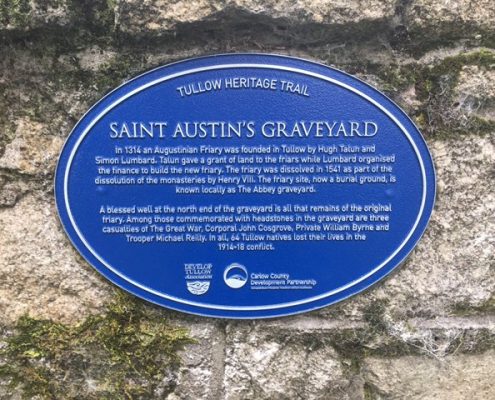 In 1314 an Augustinian Friary was founded in Tullow by Hugh Talun and Simon Lumbard. Talun gave a grant of land to the friars while Lumbard organised the finance to build the new friary. The friary was dissolved in 1541 as part of the dissolution of the monasteries by Henry VIII. The friary site, now a burial ground, is known locally as The Abbey graveyard.

A blessed well at the north end of the graveyard is all that remains of the original friary. Among those commemorated with headstones in the graveyard are three casualties of The Great War, Corporal John Cosgrove, Private William Byrne and Trooper Michael Reilly. In all, 64 Tullow natives lost their lives in the 1914-18 conflict.

In 1842 Mr Charles forth, Surveyor to the Carlow Grand Jury, submitted a paper to the Institution of Civil Engineers on Tullow bridge. The old bridge, he stated, ws dangerously steep and had a very narrow roadway of only 18 feet. He recommended that a new bridge with five arches be built at a cost of £485.

Tullow has one of two bridges on the River Slaney with flattened arches and faced entirely with cut granite. Tullow bridge has significant architectural merit with simple but effective detailing over the piers and pointed cutwaters (bulwarks).

The galvanised steel pedestrian walkways were added in 2019. 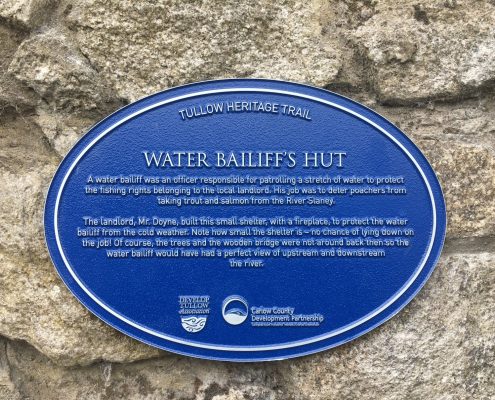 A water bailiff was an officer responsible for patrolling a stretch of water to protect the fishing rights belonging to the local landlord. His job was to deter poachers from taking trout and salmon from the River Slaney.

The landlord, Mr. Doyne, built this small shelter, with a fireplace, to protect the water bailiff from the cold weather. Note how small the shelter is – no chance of lying down on the job! Of course, the trees and the wooden bridge were not around back then so the water bailiff would have had a perfect view of upstream and downstream the river. 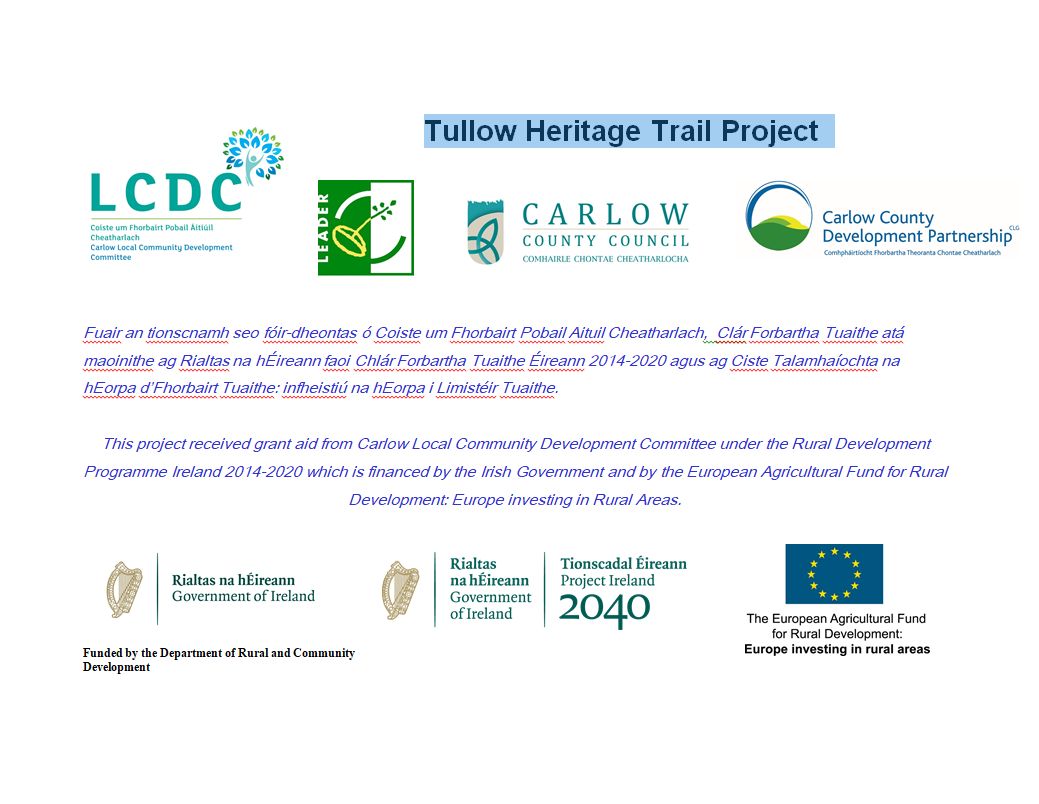